While the Dungeons and Dragons: Basic Set was my first, the de-flowerer of my D&D virginity, the Expert Set mastered me until soon enough Id become this games bitch.

This came as a boxed set that included a rulebook, a starter module (an adventure) called The Isle of Dread, and a spiffy new set of dice. Mine were mostly blue, aside from a white 6 sided die and a green 8 sided die. Nothing special compared with the crazy designs they later came up with, but I loved them.

The object of this set was to further the game for players whod mastered the basics. While the Basic Set limited you to the first three levels of advancement (which was obtained through adventuring), the Expert Set took you all the way up to level 14!

Do you even understand the enormity of that?! LEVEL 14!!! Holy snausages! Whole new heights of power could be achieved. Fighters (warriors/knights) could rise to hold land and castles! Clerics could raise the dead! Wizards could do this! VVV 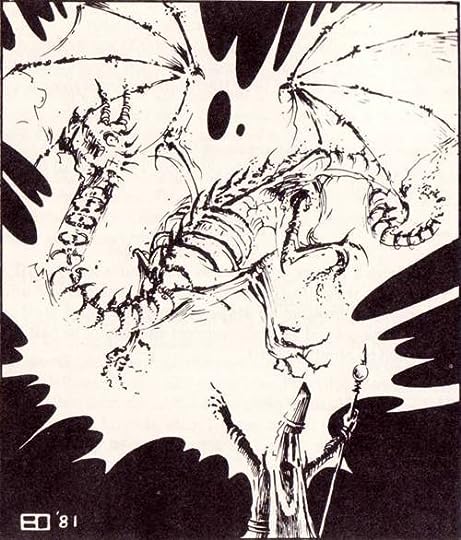 Oh, the possibilities, the promise...

Overall there was just more, more, more. D&D was expanding, but doing it in logical, manageable steps...or dragging it out in order to make more money on a hot-ticket brand name.

Whatever their reasoning, they were doing it right. The main item in the set was the rulebook. It was laid out very well, even mirroring the way the game was played with sequential parts of the book titled Player Character Formation, Spells, The Adventure, The Encounter, Monsters, and Treasure. That was the natural progression of your average D&D adventure.

The creators of D&D were still working things out at this point (the early 80s), so you still had oddball things like character classes that encompassed both class (the characters profession) and race. Later additions would rectify that by splitting up the classes and races, so that you essentially picked a profession (say a fighter or wizard) and also a race (such as human or elf, etc).

Another issue was that they hadnt developed the alignment yet, alignment being your characters designation as being a law-abiding goodie-two-shoes or a selfish rebel. Later they would expand alignment to not only include which side of the law you sat on, but also whether you are a good witch or a bad witch (...sorry, Oz just popped in there,) which gave the characters a new fold of complexity. Therefore you could be Lawful Evil, a law-and-order dick, like Hitler for instance. But whats worse in the Expert Set was the rulebooks unintentional ambiguity regarding alignment:

Chaos (or Chaotic) is the opposite of Law. A chaotic is selfish and respects no laws or rules. Chaotics cannot be trusted.

Neutral (or Neutrality) is concerned with personal survival. Neutrals will do whatever is in their best interest, with little regard for others.

Dont Chaos and Neutral sound like the same damn thing? Well, its a minor quibble and they got it ironed out soon enough.

And never you mind! Instead feast your eyes on these brandy new spells! No more must the wizard futz around with wimpy Magic Missiles and the barely effective Protection from Evil. Now you could fry your enemies with lightning bolts and blast whole roomfuls of them with fireballs! Hell, you could fly! And if you got REALLY powerful you could control the weather, move the earth and conjure up instant death! MWAHAHAHAAAA!!!

Gain enough gold and you could hire your own minions! Man, did I ever get excited about the possibility of hiring mercenaries. I couldnt even explain why. Something about it thrilled me. I was an odd child.

All of them would end up in the Monster Manual book about a year later. MM would also include a few new monsters, which made the buying of that book also necessary in our little enamored minds. Oh the money we spent and the birthday/christmas present begging we did!

Once the monsters had been slain it was time for the loot! The Expert Set added all kinds of new magical goodies! Magical armor and weaponry, potions, rings, wands, staves and miscellaneous! Miscellaneous magic was always the most interesting, if the least used. Crystal balls and Ropes of Climbing? Sure. But I never did find a place to insert the Censer Controlling Air Elementals or the Bag of Devouring into the campaign (ongoing adventure series including the same characters). I did once use the Mirror of Life Trapping and that nearly ended the whole game.

Towards the back of the rulebook magical research and production, castle construction, and designing a dungeon were discussed for the benefit of the Dungeon Master (DM), the person who refereed the game and often the one who created the adventures.

Also, the idea of wilderness adventuring was expounded upon. Before, the players were pretty much restricted to spelunking and crawling through dank dungeons, all very confined spaces and manageable. Now, the experienced and, if learned, DM could confidently allow the players to roam free, free as the wind blows! They could step outside, pick a compass point and make for it, and all the while the DM would be at the ready with his/her charts of wandering monsters with which to ambush the characters. Granted, there was usually a destination in mind. Wandering around willy nilly is fun only for a short amount of time. The players inevitably wanted some sort of goal, so all wilderness adventuring ended up doing essentially was to expand the adventure possibilities, to lengthen the journey, if lengthening was desired. As the DM, I utilized wilderness adventuring as a means to get from home base (some civilized town or something) to the adventures target (like the ruins of a castle, a cave complex, perhaps something haunted, whatever) and in the process it turned the whole experience into something more epic. Nothing makes obtaining the goal sweeter than overcoming a few trials along the way!

Everything was getting bigger, better and more bad-assed! And just in time too, as the Basic Set no longer satisfied me. Even though I only used it for a couple years before it too was replaced, I absolutely loved the Expert Set. Right from the start, with that oh-so clever cover of the wizard conjuring the image of the Basic Set cover, I knew I was beholden of a greater power than Id ever discovered! ....well, in the gaming realm that is. Discovering girls, our naughty bits and what could be done with them was WAY MORE powerful!
File Name: dungeons and dragons expert set.zip
Size: 59328 Kb
Published 20.12.2018

This is the edition of the D&D Expert Rulebook by Dave Cook, which was sold as a counterpart to the Moldvay D&D Basic Set. Product.
David Zeb Cook

It was first published in as an expansion to the Basic Set. Although the version of the basic set extensively used the fantasy world of Blackmoor which was a feudal kingdom that drew inspiration from The Lord of the Rings , [ citation needed ] Schick and Moldvay decided to change the setting for the revision. The Basic Set saw a major revision in by Tom Moldvay. Eric Holmes in Marsh , supporting character levels 4 through Between and this system was revised and expanded by Mentzer as a series of five boxed sets, including the Basic Rules , Expert Rules supporting character levels 4 through 14 , [7] Companion Rules supporting levels 15 through 25 , [8] Master Rules supporting levels 26 through 36 , [9] and Immortal Rules supporting Immortals — characters who had transcended levels.

For the first time ever, it offered the opportunity to achieve levels in TSR's introductory game. Beyond Basic. What Could Have Been. When Gary Gygax first announced the upcoming Expert Rules in The Dragon 35 March , he said they would include "new classes, spells, magic, monsters, and so on. About Those Level Limits. Though halflings, elves, and dwarves are limited to 8, 10, and 12 levels, respectively, that's not necessarily a big deal when the game only went up to level Enter the Wilderness.

If you started with a 1st character, and have enjoyed the wilderness expansion of Expert level play, then you are ready for this set.
five conversations you must have with your son

More items related to this product

It was published in August — or perhaps a bit later. About the Title. For their second printing that title was updated to "Set 2: Expert Rules", which definitely makes more sense. About the Cover. To highlight the wilderness focus of the Expert Rules , the new cover features a fighter on horseback battling a dragon out in the middle of nowhere.

Five conversations you must have with your son

The church historians of england

Five conversations you must have with your son